I get asked this question a lot:

‘I have a hydramaster with 2″ elbows on waste tank. I want to replace so I can run 2.5″ from waste tank to door. I was informed that you may have what I need. Any guidance would be appreciated’

You will get a nice boost by running two x 2” vac hoses 6-10ft each from the dual ports on top of your tank down to a 2.0” Y connector then run your single 2″ on to the job. Or get inline vac filter with 2 x 2” ports in back.

The Silver Bullet is recommended because it serves as a really good filter, reducing the need for you to go inside your waste tank while maintaining airflow throughout the job.

We’re talking guys who feel the need to improve their vacuum.

I make a group of products called Max Vac Package designed to help guys make the most of their vacuum. One of the worst things you can have is 90 degree bends, an inherent flaw in Hydramaster designs.

You can’t get back the loss that bending air causes but you can reduce the loss in other areas along the line like with shorter & straighter runs and fatter hose and Y connectors and inline filters that minimize the loss in ariflow. The NET result is what we’re after; increasing airflow relative. Installing the MVP does that.

Advanced stage MVPs take average cfm tms and boosts them to the equivalence of more powerful (expensive) units without the expense of those units.

Here’s one guy of many, a happy cleaner who’s glad he did the MVP… 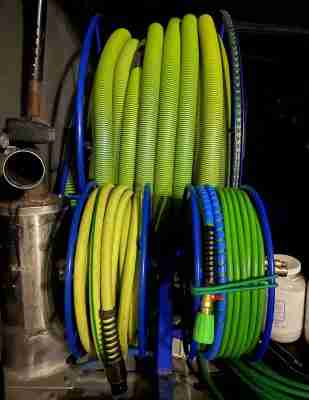 ‘Got the hose and connectors thank you for the outstanding service.’

When I say airflow, I mean CFM.

For those who don’t know, airflow is measured in terms of cubic feet per meter, CFM. Like passing a shoebox through a vac hose, how many shoeboxes can you pass in a minute. That’s airflow. That’s CFM.

Lift is measured by inches of mercury. Lift is Horsepower like a 30 horsepower engine. A given truckmount has a specified amount of lift. Adjustable at the machine, manufacturers frown on adjusting lift.

CFM on the other hand is as variable as light, sound and energy itself. I passed around the cfm meter enough to know. We observed 3 cardinal rules you don’t break regarding airflow: Length, Area and Straightness. We learned to keep our hoses short, fat and straight. No big revelation; rather simple facts, all backed by simple scientific airflow measurements using the cfm meter.

Try changing the length of your vac hose. For a given horsepower or lift, a shorter hose run will give you relatively better airflow thus quicker drytimes. No brainer. right?

Try sucking a chocolate shake through a coffee stirrer and learn real quick that it is easier if you use the big fat straw they give you with the shake. Right? Like you and your son drinking from the same chocolate shake – you have much more lung power (horsepower, lift) than he does, yet he will beat you if you had to use the coffee stirrer and he got to use the fat straw. Thus it is with truckmounts. Smaller truckmounts with less horsepower will give you relatively better dry times than powerful truckmounts that are all choked down with skinny vac hose. Fact.

Try bending light though a prism – it gets broken up into its individual wavelengths. Right? Each component is less than its sum. So it is with airflow; you bend air and you lessen its force. I cringe at Butler guys still running live vac hose reels. Think about airflow as a vector; now bang that vector into the outer wall of that vac hose thousands of times as it goes around the live reel. What do you get? You get a bunch of relatively smaller vectors, the sum of them being weaker than the original vector. Another no brainer but how long has been Butler been promoting that live vac reel? I took Cool Cuffs away from them for breaking this cardinal rule alone.

Isn’t dry times what we should be focused on?

On a relative basis, two guys with the same machine will have the same lift but will have drastically different dry times depending on the variables they choose as they move away from the truck.

The guy thinking lift is king will likely use more hose than he needs. It will be stiff, low flow vac hose with leaky, flow restricting cuffs. this is what you guys get with the standard truckmount. Or didn’t you know? He will pile up his hose as he backs out of the job. He uses a whip hose sure to be skinny and flow restricting, connected to a skinny wand with no glide; a wand that is locked down on the carpet. this guy gets relatively poor airflow compared to the guy who is actually worried about maximizing his AIRFLOW.

The max airflow guy has maximized his airflow using the MVP he got from Wanders. This guy is totally aware of his hose run. When his customer asks him how long is it going to take to dry, he excitedly stops what he is doing and points them outside to his fat hose and brags how he gets the fastest dry times in town! He points to his dual 2” or 2.5” hose. He’s using the colorful, high flow smoothbore hose from Amflex Plastics designed to work beautifully with the first true 2” and true 2.5” hose connectors, Cool Cuffs. Developed by Wanders, he’s using the Latched Set Cool Cuffs which don’t leak relative to all the other cuffs out there. He and his helper are keeping the vac hose as reasonably straight as possible and as they back out of the job, they are disconnecting and removing hose they don’t need to finish the job. They use and move fans and otherwise advise the customer how to help move air as the carpet dries.

All in all, the guy is using the MVP has impressed the customer with his awareness of and commitment to solving the customer’s #1 concern – dry times. In & out quick like they were never there except for the clean & dry carpet THIS is the company people seek out for carpet cleaning.

So which guy are you?